Last week we organized some CircleMe drinks in beautiful Paris.. and we have to say that we had a blast!
We arrived around 5pm at our chosen location, which in this case was Le Dernier Bar Avant La Find Du Monde (French for ‘The Last Bar Before the End of the World’.) We loved the place, as it was full of passionate people. The place had many different themes, including an Indiana Jones one! 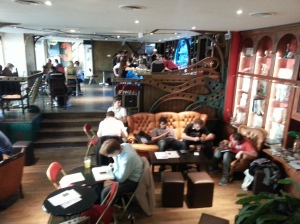 Le Dernier Bar – Where we hosted our Paris CircleMe Drinks

At 6pm the guests started to arrive, and so we started to talk about CircleMe, Paris, and about our passions! Some talked about performing arts, others about technology, music… Time flew, people came and went as we weren’t only meeting people passionate about CircleMe, but also enjoying a great time with them!

One interesting thing about the users at the meet up is that there were so many different nationalities. There were CircleMe users from France (of course), Brazil, Portugal, Spain, Italy, Russia, America and Mexico! This showed just how metropolitan the city of Paris is 🙂

Time passed by so quickly that at around 11pm we realized we hadn’t taken any group photos! So we assembled the remaining Circlers for a last minute photo! 😉 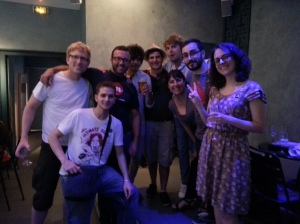 Ooops! We forgot to take a group photo until 11pm, when many had left :- (

Overall, we had a great, great time thanks to the great Circlers who visited us, the location chosen for the bar and, well… the city itself! So we can now officially claim that we have ‘Circled’ Paris! And here is proof of that! 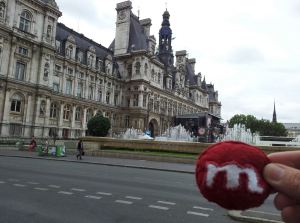