Yesterday we hosted the first ever CircleMe meetup in London and we have to say that it was a great success and that we’re very excited to have met many of our users!

The event took place in Old Street, the “Silicon Roundabout” in London. We met in “Meter”, a new bar just outside the station.

We were meeting at 6PM, and soon enough, some users started to arrive and we started to talk about CircleMe and much more! Soon, there were many of us and we were having a great time. 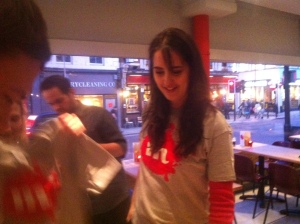 We gave some cool CircleMe T-shirts to those users who joined us : – )

It was a great occasion for the CircleMe team to get some sincere feedback (we all know drinks foster sincerity 😉 ) and get to hear what works for our users, what doesn’t, and what they would like to see in CircleMe in the future. Certainly, we got a big list with feedback and suggestions to improve both the web version and the mobile app. We’re always on the hunt for new suggestions and feedback, so do not hesitate to share your feedback here or on Facebook or Twitter.

First CircleMe meetup in London. We’re terribly sorry we couldn’t get in the picture to those who left early/arrived late : – (

We continued to have a great time and some 5 hours later, we were still chatting and some even dancing and having a great time.

Funnily enough, our launch party coincided with the launch party of another cool service: lightbox. We got talking and sharing ideas : ) 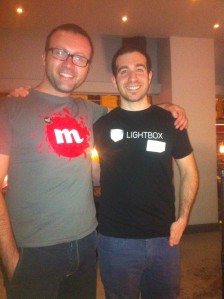 Overall, this first CircleMe meetup was a great success and we just can’t wait to organize new ones in the near future to get feedback from our users, and not only from the UK! For starters, you can count with a CircleMe users meetup in Milan, Italy, and more should come after that! Stay tuned on our Facebook page and Twitter!

One thought on “The first ever CircleMe meetup!”